The Cybils Awards release their short lists every year on New Year's Day and announce the winners on Valentine's Day. Yesterdays lists were for best fiction and best science fiction/fantasy. Today's the rest!

We start with a category that's close to my heart, nonfiction. (I served on this committee for four years.) This category is for middle grade and YA. Only one is truly middle grade, but I included it anyway, so it didn't feel left out.

Last Airlift: A Vietnamese Orphan's Rescue from War by Marsha Skrypuch. Aimed for younger readers, Skrypuch tells the story of Son Thi Anh Tuyet, an orphan with polio airlifted out of Vietnam at the end of the war, and her struggles to fit in with her new Canadian family.

Moonbird: A Year on the Wind with the Great Survivor B95 by Phillip Hoose. Every year, red knot rufas migrate from the Canadian Arctic to Tierra del Feugo, the southern tip of South America, and back again. Following the path and history of one of these birds, Hoose tells the story of the rufa, the scientists who study them, and the need for conservation and the ripple effects that one species in danger can have.

Temple Grandin: How the Girl Who Loved Cows Embraced Autism and Changed the World by Sy Montgomery. Aimed at the younger end of YA, this biography shows Grandins struggles to succeed in a world she sees differently than most of us. Montgomery not only shows the readers Grandin's life, but also how her mind works and the impact her work with animals has changed the American meat industry.

Titanic: Voices From the Disaster by Deborah Hopkinson. Filled with historic detail and photographs, Hopkinson's focus on the accounts of the survivors and witnesses keeps this epic tragedy very personal.

Here are the graphic novels:

Darkroom: A Memoir in Black and White by Lila Quintero Weaver. An Argentinian immigrant in the American South during Jim Crow, Quintero Weaver was neither black nor white, but a witness to many important milestones of the Civil Rights movement.

Drama by Raina Telgemeier. Callie tries to figure out boys, friendship, and how to build a killer set with no budget.

Friends with Boys by Faith Erin Hicks. After being home-schooled her entire life, Maggie now must face public high school, accompanied by the ghost that's been trying to tell her something for years.

Ichiro by Ryan Inzana. After moving to Japan with his mother, military-obsessed Ichiro starts to learn about the true cost and meaning of war--both in Japanese history and in the spirit world he gets stuck in.

Marathon by Boaz Yakin and Joe Infurnari. An evil king. A battle that will change the course of Western history. A slave running from Athens to Sparta and back. The start of a race that now marks a goal for many runners... 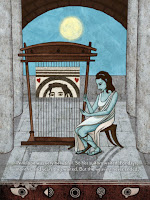 Two more catagories had some entries for teens.

Most of the book app finalists are for younger users, but The Voyage of Ulysses looks like it would be a lot of fun for teens.

The other finalists in poetry were for younger readers, but Lies, Knives, and Girls in Red Dresses by Ron Koertge is definitely one for the teens. Using free verse, Koertge offers up dark and grimm versions of 23 fairy tales.

What did you hope to see on the Cybils lists this year?

Links to Amazon are an affiliate link. You can help support YA Reading List by purchasing any item (not just the one linked to!) through these links.
Posted by Jennie at 3:05 AM