It's Movember-- a month where guys stop shaving in order to raise awareness (and sometimes money) for prostate cancer and other men's health issues. For a fun display, I stuck some mustaches on books. There's not real theme--just books that look awesome when you add a mustache (which is also a really good way to sell some favorite books that may be overlooked in the stacks)... 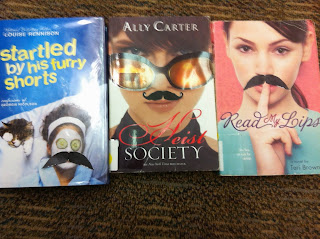 Startled by His Furry Shorts by Louise Rennison. In the seventh book of the series, Georgia's once again (as always) torn between Dave the Laugh and Robbie the Sex God. One of the funniest in the series, complete with lots of MacUseless. Start with Angus, Thongs and Full-Frontal Snogging.

Heist Society by Ally Carter. When a group of paintings is stolen, there's only one suspect, Kat's father. The only way to save him is to find the paintings and steal them back. Kat's been raised in a family of art thieves, but this time she's in charge with her own crew, and they're about to pull of the most daring heist in history. Follow it with Uncommon Criminals.

Read My Lips by Teri Brown. When Serena moves to a new town, she's desperate to fit in. The popular girls promise her entry into their group, but only because they know she can read lips-- and can use this talent to find out everyone's gossip. 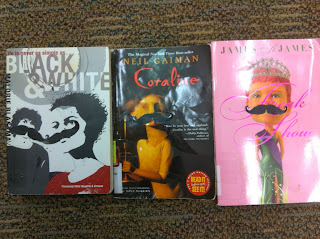 Black & White by Marjorie Blackman. Sephy and Callum have always been friends, but in their divided society, it's a forbidden relationship--especially as it deepens into something more. But society is so divided that some Naughts have turned to terrorism. Now they're not just fighting for their love-- they're fighting for their lives. Follow it with Knife Edge.

Coraline by Neil Gaiman. Coraline feels ignored by her parents and is overjoyed to find a secret door in their new house that leads to an alternate reality, a seemingly better one. But the Other Mother never wants to let Coraline go back the real world, and she sees that not everything is as it appears. This one's for a bit of a younger audience, but is still deliciously creepy. (And looks awesome with a mustache!)

Freak Show by James St. James. At his new school, Billy is bullied horribly for being effeminate. Even when trying to be "normal," he gets it horribly wrong. So, he decides to be his bad-ass drag queen self. His first period biology classmates beat him into a coma. Luckily for Billy, everyone realizes they've gone too far and this is the beginning of the book, not the end. 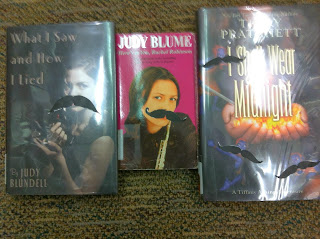 What I Saw And How I Lied by Judy Blundell. Her step-father returns from WWII, but something isn't right. A sudden vacation to an off-season Palm Springs is fraught with tension. Evie is struggling to grow up, but the secrets she uncovers will change everything.

Here's to You, Rachel Robinson by Judy Blume. Rachel's brother is back from boarding school, and his behavior is causing massive problems in the house. Plus, Rachel is tired of being perfect--the pressure is starting get to her, and she's not sure how long she can hold everything together. Start with Just As Long As We're Together.

I Shall Wear Midnight by Terry Prachett. In the 4th book of Discworld's Tiffany Aching arc, a darkness is growing and respect for witches is falling. It turns out she awakened an evil, and it's coming for her, unless she can stop it, but the entire Chalk is at risk. Plus, MacFeegles! With mustaches! Start with The Wee Free Men.

What books do you want to put a mustache on?

Links to Amazon are an affiliate link. You can help support YA Reading List by purchasing any item (not just the one linked to!) through these links.
Posted by Jennie at 3:01 AM