Last week, I shared some books that I stuck mustaches on for my Movember display. Here are some more! 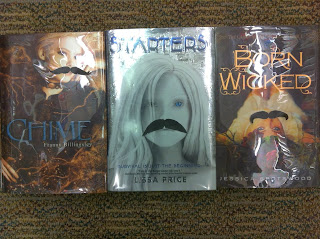 Chime by Franny Billingsley. Briony has the sight. She can see the spirits and creatures, she follows the Old Ones. The Boggy Mun is killing the town's children with the swamp fever. Her sister, Rose, is sick. The Boggy Mun tells her if she can stop Mr. Claybourne from draining the swamp, he'll make everyone well. But things are complicated by Eldric, Mr. Claybourne's man-child son, with is mane of hair and easy ways.

Starters by Lissa Price. The Spore War killed everyone over 20 and under 60. Now "Enders" (those over 60) rent the bodies of "Starters" (teens). Callie lets her body be rented because she needs the money to support her younger brother. But something goes wrong, and she wakes up when her body is still being rented, and partying is not the only thing on the agenda. The sequel, Enders, comes out in January.

Born Wicked by Jessica Spotswood. The Cahill sisters are eccentric, but no one knows they're witches. The Brotherhood is after them. But then Cate finds a prophecy in their late mother's diary-- a prophecy that says that what the sisters really have to fear is each other. Follow it with Star Cursed. 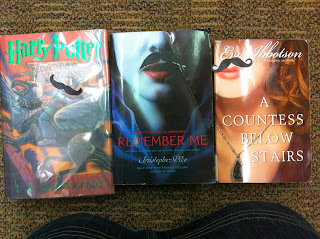 Harry Potter and the Prisoner of Azkaban by JK Rowling. Harry's back to Hogwarts, but one of Voldemort's biggest supporters-- the one who betrayed his parents-- has escaped from Azkaban and is after him. Now Harry has a new evil to face, dementors showing up at Quidditch matches, and a very intriguing new Defense Against the Dark Arts professor. On the off, rare, chance you haven't actually read this yet, start with Harry Potter and the Sorcerer's Stone.

Remember Me by Christopher Pike. When Shari wakes up, she is dead and a ghost. Everyone says she jumped off the balcony at the party, but Shari knows she was pushed. She must find out the truth-- luckily, she's not the only ghost around. This omnibus edition contains the entire trilogy-- a personal favorite from my teen years.

A Countess Below Stairs by Eva Ibbotson. Anna's a Russian Countess who's fled communist Russia and landed penniless in London. She's had to take a job as a housemaid in a manor house. Rupert, Earl of Westerholme, was never supposed to be Earl, but his older brother died in the war. Mersham is out of money, and Rupert has to marry for money. You know where this is going but you're still on the edge of your seat. 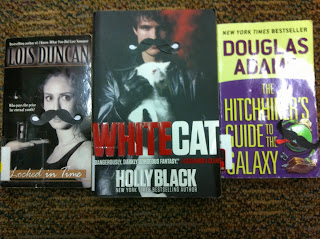 Locked in Time by Lois Duncan. When Nore and her father move in with her father's new wife and family, she's struck by how young and pretty her step-mother is. But the more she gets to know her new family, the more she realizes something is very, very wrong.

White Cat by Holly Black. Cassel's family are curse workers, which are illegal. Cassel isn't a curse worker-- he has the magic touch, but he killed his best friend. But nightmares of a white cat draw him further and further into his family and their life of crime. Follow it with Red Glove

The Hitchhiker's Guide to the Galaxy by Douglas Adams. Ford Prefect is a writer for the Hitchhikers Guide to the Galaxy-- a handbook every space adventurer needs. He rescues hapless earthling Arthur Dent moments before the Earth is demolished to build a highway. Follow it with The Restaurant at the End of the Universe and remember to pack your towel.

Links to Amazon are an affiliate link. You can help support YA Reading List by purchasing any item (not just the one linked to!) through these links.
Posted by Jennie at 3:01 AM